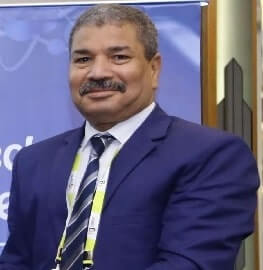 Professor Mahmoud Khodari Maeila Hamed is Vice President for postgraduate Studies and Research at South Valley University. He is also Professor of Analytical Chemistry from 1999 to present. Professor Khodari has had a long and distinguished career at South Valley University. He has served as the Vice president  South Valley University from 2006 to 2014 and from 2016 to present. Prior to that, he was the vice dean of faculty of Science. He was also the chair of the chemistry Department. Professor Khodari  awarded the State Incentive Award in Chemical Sciences in 1999.
He earned Ph.D. in Analytical Chemistry from Universte Libre  de Bruxelles (ULB) Belgium and Assiut University in 1990. He hold a B.Sc. in general chemistry from Assiut University (May 1980) and M.Sc. in analytical chemistry from Assiut University (1985). He published 58 papers in the field of Electro-analytical chemistry and biosensors. He supervised 17 M.Sc . and 6 Ph.D.  thesis,  His H-index is 14 and total citations are 422.  He contributed to the first and second editions of the Modern Dictionary of chemical terms ( 2006 and 2015, respectively) . He participated in 23 national and international conferences and meetings. In addition he was visiting professor to Germany in  Braunchweig (2005) and Hanover 2010 also He traveled to Germany in 2001 on a scientific mission to Munster University