Biomedical Applications of light emission from thin-film nanomaterials and nanoparticles 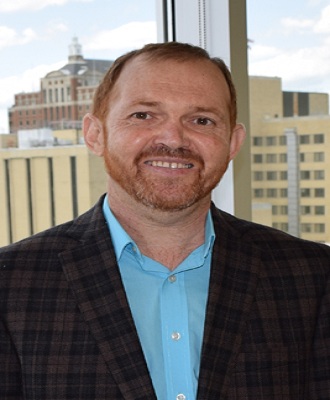 Rare-Earth (RE) doped nitride semiconductors thin film nanomaterials are attracting increasing attention as phosphor materials, and are used for optical displays and devices. Sputter deposited AlN is a viable host for luminescent rare-earth (RE) ions due to its transparency over a wide range, including the UV, IR, and entire visible range. GaN doped with RE ions elements is also used for similar applications in visible and IR. The potential suitability and use of luminescence from RE elements towards biomedical applications have shifted the paradigm of RE applications. The present work reports electron penetration depth for electron beam therapy applications and stopping power calculation exploiting the luminescence from thin-film AlN:Thulium and AlN:Holmium thin film nanomaterials. A new method of calculating the electron stopping power of materials used for radiation shielding and protection is introduced based upon the blue and green light emission from AlN:Tm/AlN:Ho bilayers. This method also provides a simple way of testing electron beams for energy loss with time. The current work also reports biomedical applications of RE- Oxide nanoparticles and the use of GaN use a protector from ultraviolet (UV) radiation. The potential use of gadolinium thin films to make a single radiation detector for α-, β-, and γ- radiations detection. Triply ionized Gd+3 is a strong UV emitter. It has been proved already that UV light is emitted from AlN:Gd thin film nanomaterials under photon and electron excitations which can be used to detect β- and γ-ray photons.

Muhammad Maqbool has obtained Ph.D. degree in Condensed Matter Physics & Photonics from Ohio University, USA. He has obtained M.S. degree in Medical & Radiation Physics from the University of Birmingham, UK. He got his first degree from the University of Peshawar, Pakistan. Before joining UAB as a faculty member, he worked as Associate Professor of Physics & Medical Physics at Ball State University for 9 years. I also worked as an Assistant Professor of Physics at the University of Mount Olive. He teachs several courses in the Master of Science in Health Physics program and Master of Science in Nuclear Medicine Technology. Those courses include Principles of Health Physics, Medical Radiation Physics, Principles of Radiation Dosimetry, Physics of Medical Imaging, Nonionizing Radiation, Advanced Radiation Biology and Research Methodology & Publications Analysis and Computed Tomography and Laser Safety.

He actively engaged in research and published 78 research papers in highly reputed peer-reviewed journals. He has obtained a US Patent for inventing the Smallest AlN: Ti microlaser on optical fibers in whispering gallery mode. His student also obtained the best researcher award in the Health Physics Society 64th Annual Meeting held in Orlando, Florida, USA, on July 7-11, 2019. He has published two books and book chapters. His recent book: An Introduction to Medical Physics is used as a recommended textbook at UAB and reference book at other Universities. Currently several graduate students work on their research projects with him. He works as consultant for many national and international organizations. He also works as grant reviewers for research funding bodies. He has established research and professional collaboration with many researchers within UAB and other Universities in USA and abroad.

He actively takes part in professional bodies and organizations in the field. Currently he serves as the President of Alabama Chapter of Health Physics Society. He works as Chair of the Gamma rays, x-rays and ultraviolet ray photonics technical section of the Optical Society of America. He is an active member of several professional organizations including Health Physics Society, American Physical Society and Optical Society of America.